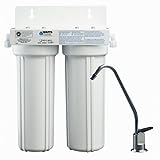 Watts is a company that produces a variety of water purification systems. The Watts WP2BVC Premier 2-Stage Microbiological Purifier Water Filtration System falls in the lower/middle range of the Watts product lineup (which includes everything from 1-stage to 5-stage filters). It weighs 8.6 pounds and is relatively small in size, which should accommodate most sinks.

PROS
CONS
User Rating: Be the first one!

The Watts WP2BVC 2-Stage purification filtration system is designed to remove sediment, chlorine, bacteria, viruses, and cysts. It does not remove lead, chemicals, and other toxins (arsenic, chrome, etc.), although Watts does offer other water purifiers that do remove those additional elements. This filter is also designed to improve the color, clarity and taste of water that is odorous or discolored. Customers report that the appearance and taste of water while using this purifier is excellent, even when living in areas known for poor tasting water.

This system works by being mounted underneath the countertop, in the space below the sink. It features a slim faucet, separate from your existing water faucet, that fits up through the auxiliary hole that is already in most sinks. Watts promotes the fact that the WP2BVC can be mounted on the angle stop that is found under most sinks. The system is designed to be easy to install or remove in just a few minutes, which means that one could remove it from the kitchen and install it in an RV/camper trailer for a trip. It is designed to be compatible with camper trailer installation as well.

However, customers report that the installation process is not as simple as Watts advertises it to be, and many complain of an outdated manual that does not match the updated product. Despite the inconvenience, most report being able to install the unit with little or no difficulty, as long as they had some basic plumbing knowledge before they started.

Watts says that each filter replacement will last for 6 months. After six months, or when the water begins to come out of the faucet more slowly, this means that it is nearing time to replace the filter. Replacement filters can be purchase in packs of two, which means you get 1 set of 2 filters; one filter for each of the system’s two stages. When first installing a new filter, customers report that the water needs to run awhile (approximately 10 gallons’ worth) for the filter to ‘clear’, after which the water is clean in both taste and appearance.

Bottom line: The Watts WP2BVC Premier 2-Stage Microbiological Purifier Water Filtration System does a good job for the price and includes a more attractive faucet than cheaper competitors, yet it’s not at the top of the price scale either. It’s a little tricky to install, but the end product is very clean, good-tasting water that is inline with the manufacturer’s promises.

We will be happy to hear your thoughts

Recent Posts
About Us

safewaterbottlereview.com is a participant in the Amazon Services LLC Associates Program, an affiliate advertising program designed to provide a means for sites to earn advertising fees by advertising and linking to Amazon.com