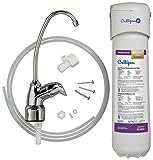 Installation for this product is relatively easy. It is installed underneath the countertop, in the space below the sink. There, the filter unit attaches to the water intake on one end, and the other end is affixed to a faucet that sits above the sink, next to the main kitchen faucet. For homeowners who already have an extra hole in the sink (typically used by the auxiliary spray hose, which can easily be removed), installation is even easier. For owners without an extra hole, cutting that hole will present an extra step in the installation process, just as it will for any other under-sink, in home drinking water system.

On the whole, customers report that the water from this product tastes good, and represents a noticeable improvement over municipal tap water straight from the tap. Based on customer feedback, the water quality, just like the price, is higher than that of filtered pitchers and lower than that of comprehensive reverse osmosis systems. It comes with a light that indicates when the filter needs to be replaced.

Culligan says that the Culligan EZ-Change Level-4 Under-Sink Drinking Water System will reduce sediment, particulates (Class I), volatile organic chemicals, asbestos, chloramines, chlorine taste and chlorine odor, lead, and cysts (such as giardia and cryptosporidium, both of which have been known to cause illness when consumed from tap water).

This unit installs under the sink, but takes up much less space than many competing products, which is an advantage. The filters are rated to work for 6 months or for 500 gallons of water (whichever comes first) before needing replacement; on the whole, the replacement filters, like the system itself, are fairly affordable compared to competing products. It also can be hooked up to an ice maker, such as those installed in the door of a refrigerator.

However, users have one consistent complaint: the plastic faucet and connections that come with this filter are of low quality, and have been known to break very easily, even during installation. Several customers report broken seals or faucet pieces after weeks or months of use, which has several times resulted in flooding. The general feeling among customers is that the filter and water quality are worth the money, but owners would do well to invest in a more solid faucet fixture from the beginning.

Bottom line: The Culligan EZ-Change Level-4 Under-Sink Drinking Water System makes great water, but comes with a cheap faucet that can easily break and cause flooding. When installed with a solid faucet, this filter system does a good job of improving the drinkability and quality of tap water. It installs under the sink, where it takes up very little space and can also be attached to an ice maker.

We will be happy to hear your thoughts

Recent Posts
About Us

safewaterbottlereview.com is a participant in the Amazon Services LLC Associates Program, an affiliate advertising program designed to provide a means for sites to earn advertising fees by advertising and linking to Amazon.com